Historically, BUL Transmark’s third pistol line was the BUL Storm. Arguably, it’s the least known line of their pistols in the US, excepting perhaps the new SAS line (which hasn’t gotten very much play in the US yet). The Storm is a straight-out Tanfoglio TZ-75 clone, which is a slightly modified clone of the CZ-75.

Clever readers will note that this is pretty much the same situation as the Jericho, which is a clone of the Tanfoglio as well. What do I think of the Storm versus the Jericho? Read on.

My particular BUL Storm was imported by CDI Sales, and appears to be a police trade-in, as evinced by the tell-tale lanyard loop in the heel of the grip and what appears to be a lot of holster wear. The Storm is not a particularly rare pistol in the US (at least compared to such unicorns as the BUL Impact 9mm), but they tend to come and go as import lots of Israeli police/seizure guns float through. When they do swing around, they tend to be on the cheap side – around $300.

The similarities between this gun and the IMI Jericho 941F are so huge that I’d encourage you to read my Jericho 941F write-up. You can safely assume they’re the same, except for the differences I’m going to talk about.

One big difference is the dust cover situation. The Jericho has a full-length dust cover; the Storm exposes more of the slide. While this gives the Jericho a more unique appearance and might aid in protecting from dust infiltration, the Storm feels substantially lighter.

Speaking of aesthetics, the slide is also shaped a bit differently at the front on the Jericho, with more of a nose. The Storm has a more traditional flat nose. IMHO, the Jericho looks more intimidating, but, again, at a weight cost. 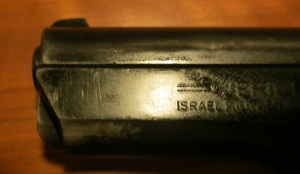 For fun, I tried swapping the Storm’s slide onto the Jericho 941F, and vica versa. I got the Storm slide / Jericho frame combination to at least fit together and seem to work (didn’t try firing it), but couldn’t make the Jericho slide work on the Storm frame.

The Jericho also has a squared-off trigger guard, whereas the Storm has a rounded trigger guard. Not a big deal either way.

UPDATE TO THE MAGAZINE DISCUSSION: Mec-Gar 16rd CZ-75 magazines do work, but require you to slap them in 1) hard and 2) ever-so-slightly forward. I didn’t have the same problem with the included magazine (MG-GT21-16), with what I believe is an EAA Witness mag, or with any other of my Tanfoglio-clone guns. I don’t know whether this is because the mag catch is worn down or it’s some sort of incompatibility between the gun and the mags, but it’s not very endearing. I have heard rumor that this sort of incompatibility can be fixed by filing the top of the catch a bit, but I am loathe to do that on a pistol with very few factory spare parts available. I am thinking that maybe I should try to hunt up a Baby Eagle III mag catch, since that appears to use a very similar frame to the Storm and supposedly is compatible with the same mags that the Jericho is. (That’s believable… the gen 2 Cherokee works fine with Mec-Gar CZ-75B mags.)

On the range, the BUL Storm worked as expected. Reliability was perfect, and accuracy was reasonable at 50ft offhand. Recoil was a bit harder than the Jericho due to the lighter weight of the Storm, but in line with other 9mm pistols.

In conclusion, I like the BUL Storm a lot, but the magazine compatibility problem limits its usefulness to me compared to the Jericho. If I can fix that with a BEIII mag release, it would be a good competitor to the Jericho, albeit with not too terribly much to recommend over a CZ-75 or TZ-75.

24 thoughts on “The BUL Storm”

Jew with a Gun